Haxe is a strictly-typed (and type-inferring) programming language with a diverse set of influences, including OCaml, Java and ActionScript. Its syntax will be familiar to anyone who’s worked with modern OO languages, however it has features you’d expect in a meta language, such as: everything’s-an-expression, compile-time code manipulation and pattern matching. In addition, it boasts an unusual talent; it can generate code in other programming languages.

In this talk I discuss the language’s killer features (and how I use them in GPU programming work), I explain the benefits of blending your static data with your code via haxe’s compile-time code generation, and I aim answer questions including: 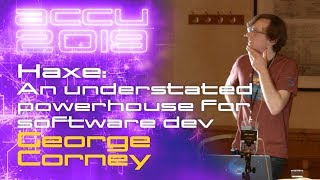